Here I am still posting about Paris, although I left over a month ago and have already been to Nice and Uzes, and about to make my way to Amsterdam via TGV and Thalys–fast trains! It is only a two and a half hour TGV ride from Avignon(Provence) in the south of France to Paris. This is generally a six and a half hour drive! Once in Paris, I do have to take a taxi to a different train station so I have saved enough time between trains to do so. But then it is just another couple of hours on the Thalys train and I am in Amsterdam! Uzes, by the way, is just a 45 minute drive to Avignon. I love the trains as I get to see, see, see…and relax, relax, relax…

There are endless topics about Paris but I also have so much to tell you about my other stops too and, I will, eventually! Today, though, I want to show you just a touch of my neighborhood in the 6th arrondissement (20 districts in all in Paris).

Over the years, I spent a lot of time in a number of locations in Paris–right bank and left. Both, in hotels and apartments. I ended up settling on the 6th. The area has a balance of history and aesthetic, especially a combination of the old buildings and modern goods to purchase, found in and amongst the cobblestoned streets. It also is home to my favorite gardens, the Luxembourg Gardens.

Much of the 6th is also just a few minutes walk to the Seine, which also means you can get to the Right Bank–Louvre, Marais, Tuileries, for instance, and then also Ile St. Louis and Ile de la Cite. On top of that list, one of my favorite pastimes, window shopping, is easily stimulated here but also my neighborhood within the 6th functions, making day-to-day living easy and comfortable.

This is not to say neighborhoods like this don’t exist all over Paris and there is even more than one in the 6th. I just kept being drawn back to this one. And, it doesn’t mean I don’t venture out to other areas of Paris. Quite the contrary. But this is where I ‘come home’ at the end of the day. After all, George Clooney is in constant ‘residence’ here too! (Nespresso, 64, rue Bonaparte-just one of the many shop locations in Paris.) 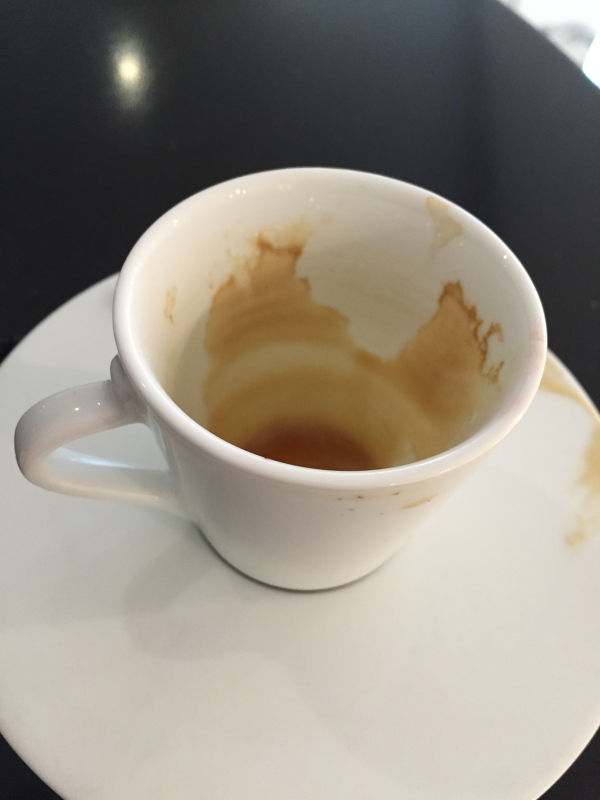 I am not the only one that thinks this! Look at the Parisians in line that agree with me!

And, once you make your purchases, you are invited, upstairs, to have a ‘cup on the house’. 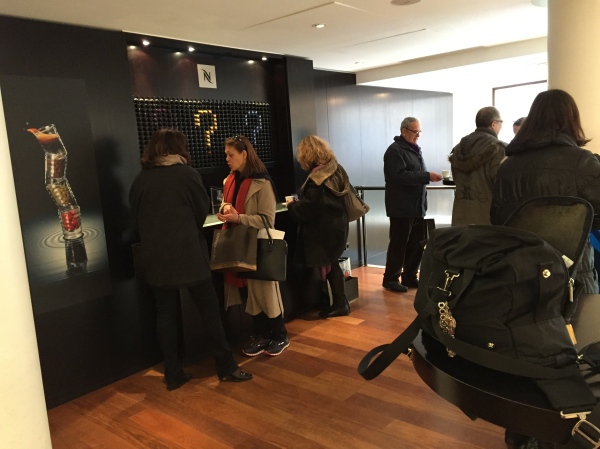 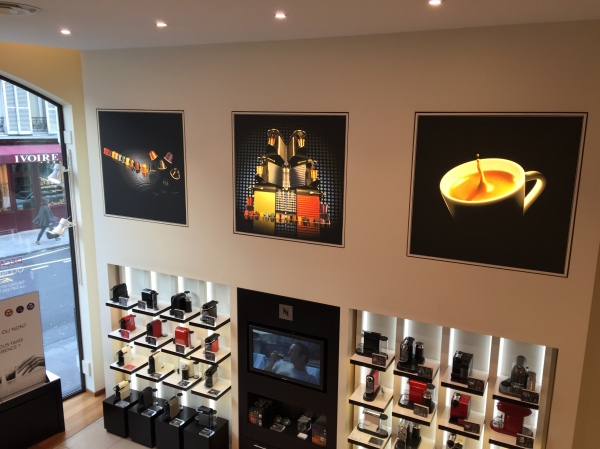 and the wide variety of coffee pods also offered…

Now, time for a stop at the boulangerie…Eric Kayser (10,rue de l’ Ancienne Comedie-one of three locations in the 6th). Notice his logo is scribed into the wall, over and over again.

Aquarelle on rue de Buci is always a good stop for flowers. I have been so captivated by the fresh flowers, that only until recently, I did I notice what was above the awning!

The Parisians have learned to clean up after their dogs. And, the street cleaners are also out regularly.

And, maybe a stop in at Taschen, publisher of art and architecture books, across the street from Aquarelle, on rue de Buci. Not much to look at from the outside, but filled with photographs in color in the books offered inside. 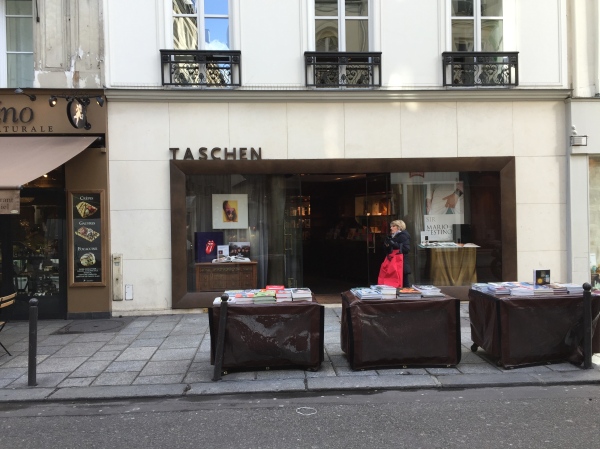 Several possibilities for lunch…but here are just a couple to consider: Fish and Semilla. They are co-owned by the same 2 guys. They are also opening up a tapas place next door to Semilla. Here is a look at Semilla (54, rue de Seine) showing the lovely ‘budding wall’: 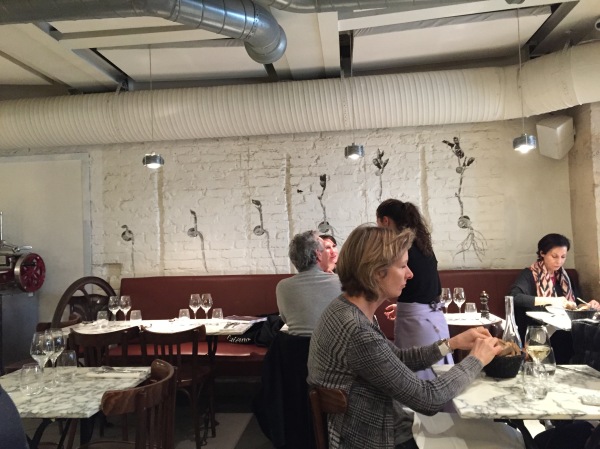 I came late for lunch so many of the tables were vacated. Here is my yummy ‘plat’:

Fish (la Boissonnniere) at 69, rue de Seine, has been around much longer than Semilla, but both have a great reputation and following, including me! They are co-owned by a Cuban-American and a man from New Zealand (who also owns the well known sandwich and salad eat in/take out shop on the same street, called ‘Cosi’). Fish started out as a wine bar. And, here is a plaque I noticed while eating my lunch with carrot cake dessert at the bar:

What’s not to say a bike ride is in order after this lunch! After all, there are baskets for your purchases! 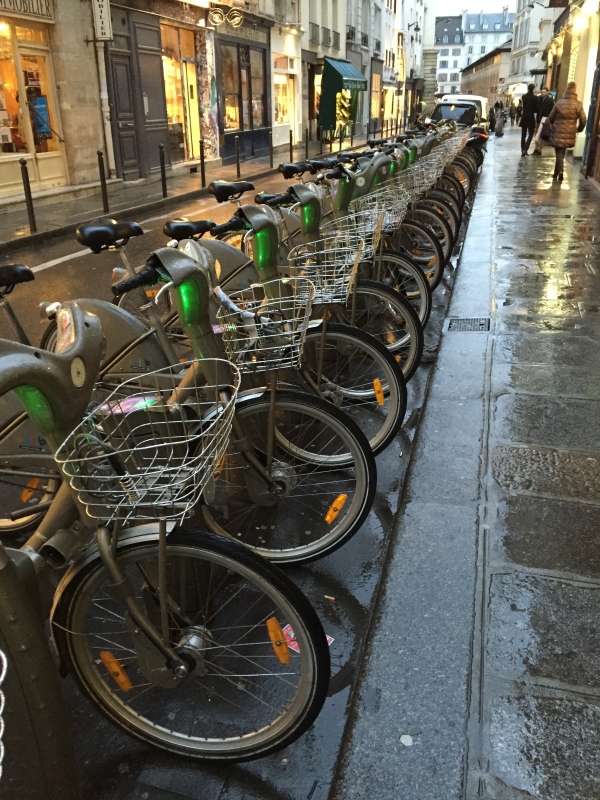 And head for the Luxembourg Gardens on a sunny day….even in February!

Many of the flowers had been planted and were starting their growth. Trees were heading in the direction of blossoming. Some were sunning themselves and, others, like me, were touring the gardens and, still others at one of the cafes. It was a great day to spend some time at the Luxembourg. And, as usual, it was pristine and ready for action. Not really a need for a bike to get there, as it is just a short stroll away with window shopping always included! The last stop…well, the wine shop, of course!

Juan Sanchez, the Cuban-American that co-owns Fish and Semilla, is the owner. The day I stopped in for a purchase or two, his father was visiting his son and doing some handyman work on the shop. The staff speaks English so they are great at assisting you with your selections. They offer wine classes. You can get in touch with them and get on their mailing list or follow them on Facebook. They also have wine tastings, which are always good for the wine, but also a chat with another English-speaking person. (La Derniere Goutte , 6, rue de Bourbon Le Chateau) I believe la derniere goutte refers to ‘good to the last drop’.

Well, we’ve hardly stretched our legs in my neighborhood…more to come…

2 thoughts on “My Paris Neighborhood”

Cynthia D. Bertelsen's Musings on Nature and Culture, Since 2008